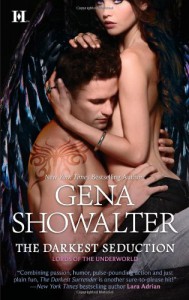 Although I was looking forward to the story of Paris and Sienna, I was not a part of the "must have Paris' story now" club. I think this helped me to enjoy this book. I went into it without expectations and enjoyed it for what it was. Had I been a part of that club, I may not have felt the same way.

Paris, the Keeper of Promiscuity, has been pining after the Hunter Sienna since the second or third book in the series. After being captured by the Hunters, through a nasty trick on Sienna's part, Paris escaped but caused Sienna's death. As she was the first woman since his possession that he was ever able to have a second time - since once his demon had a woman he never let Paris have her again - he wanted Sienna back. Once, Cronus gave Paris the option of having Sienna returned to him. But Paris chose his friend Aeron over Sienna and he has been fighting to find a way to save Sienna ever since.

For the full review, please go to http://www.thewindowseat13.com/2012/11/gena-showalter-darkest-seduction.html
Tweet